The Final Two Mediterranean Wines from Marks and Spencer‏

These two Mediterranean wines from Marks and Spencer were sent to me a very long time ago for review.

I had planned to try them at our regular Thursday evening Wine Club at work during the summer, but client demands and other factors meant we have not held one for weeks, months even.

But with the rain lashing down outside, and an end-of-term feel just one working day away from shutting up for Christmas, it was quite fitting to bring out these two reds from sunnier climes to taste.

I decided to start with the older Lebanese wine and work forwards in time. 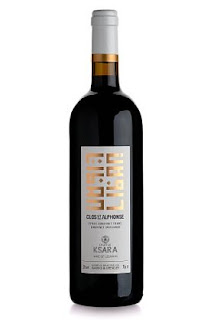 A blend of Syrah, Cab Franc and Cabernet Sauvignon, on the nose, there is baked bramble fruit, complex spice and a foresty earthiness.

On the palate it feels mellow beyond its three years - there is baked red plum and cherry fruit, roasted spice and prominent, almost zesty, acidity; it feels somewhat Old School, structurally well-built with fine, smooth, well-integrated tannins and absolutely no rough edges.

Really long on the palate with peppery spice developing, there is a pleasant, persistent firmness on the finish.

It is a classical-style wine to match with simple red meat dishes, either plain roasted or even better barbecued over coals for a touch of smokey spice.

Its mellowness also makes it a somewhat contemplative wine - ideal for a Sunday afternoon whilst finishing off a full roast dinner. 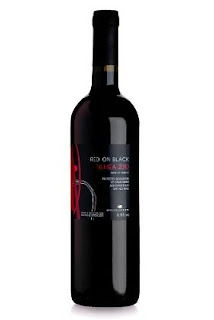 Despite giving the world the word οἶνος (which has come into English as wine), Greece's wine industry is actually much more modern; it does not have Lebanon's colonial past to hark back to.

This Red on Black, as the name suggests is dark in the glass. Made from Agiorgitiko (St George) from the Nemea region, there is redcurrant and red plum fruit on the nose with some spice.

On the palate, there is good cherry fruit, sweet vanilla spice and pleasant acidity. Low in tannins, it feels soft and silky, but is neither quite as long on the palate nor has quite as much structural interest as the Ksara.

As one colleague said, had I tried this wine first, I would have said it was very good, but now it just doesn't stand up to the Ksara.

I think that rather says it all - the Agiorgitiko is just fine in a juicy, quaffing, Languedoc-red sort of way. But the Ksara is a much more classy act; with its Noble grape varieties, French winemaker and oak ageing, it has a structure that is indebted to France even if its warmth comes from time spent under distinctly sunnier skies.

Both wines provided for review.