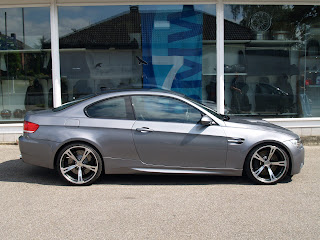 I have not owned many cars - our first was a Honda Civic Coupe that we bought in Austria in the late '90s. An embarrassingly lurid purple colour, it was actually great fun to drive, cheap to run and very practical.

Light on the pedals, with a free-revving 1.5l engine, low-gearing and a low seating position, it felt as nippy as a go-kart. 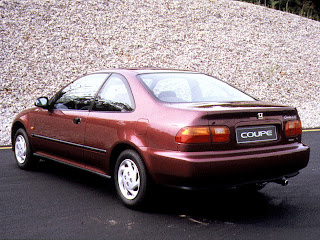 We used it to visit six of Austria's seven neighbouring countries before bringing it back to Britain with us and finally selling it on for a nominal sum five years later.

Fun to drive, it was no motorway cruiser and with a job that required me to do the 200-mile round trip to Heathrow most weeks plus child #1 on the way, we bought a 5 Series BMW with 4 doors.

With some degree of time pressure - CJ was born less than a week after we bought it - it was only the second car we viewed properly - the first, via a private seller a hundred miles away in Bristol, had over 100,000 miles on the clock, was registered in the name of someone completely different and had had the dashboard replaced with absolutely no paperwork. After that, we learnt to ask a few questions on the phone first. 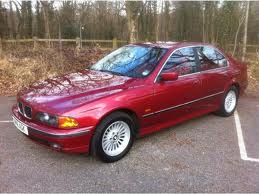 We paid between half and a third of the original selling price for it, thus saving ourselves thousands of pounds in depreciation, so I never really felt too badly off in respect of the higher running costs; we found a private garage in nearby Bury St Edmunds that would service at a fraction of the cost of our local BMW dealership and on the motorway, fuel consumption became quite reasonable.

It was never quite as much fun to drive as the Honda, never felt quite as nippy, but I soon began to appreciate what made it such a great car - the smoothness of the engine and overall sophistication of the complete package; other cars may do things individually better than the BMW, but none do everything together quite so well.

On more than one occasion, I drove it to Vienna for work - filling the boot with Austrian wines whilst there and French wines in Calais just before getting on the Le Shuttle on the way back - and always emerged feeling as fresh and relaxed as when I had got in.

But at 12 years old with nearly 130,000 miles on the clock and several chips and dents in the bodywork, we decided it was time for a replacement.

But where to go after a 5 Series ? None too keen on the appearance of the subsequent model with its "Dame Edna" headlights and controversial iDrive system, and no longer doing the long treks round the M25 to Heathrow as my job is now UK-based, we tended to use the car for shorter journeys and decided to go for something smaller.

I initially toyed with the idea of a Porsche for a while - it would have to be a four-seater, so the 911 would be the only sensible option as the kids, being young, could still fit in the back for a few more years.

Rejecting this as not affordable (but making a mental note to buy a Boxster for my retirement), I then moved on to the 3 Series Coupe with the folding hard-top roof. A practical four-seater with a solid roof and the ability for open-top motoring, it seemed like a great idea.

Until we sat in one and realised how cramped it is in the back and how little space there is in the boot with the roof down. And that was before we worried about handling issues with all the extra weight, the risk of the various electronics going wrong, fuel consumption and so on.

Around the same time, my brother took me for a drive in his SAAB convertible on a damp and chilly day in Cheshire and I decided that the reality of open-top motoring is not always quite as idyllic as the idea.

A soft-top seemed to require fewer sacrifices, but in the end, neither Mrs CWB nor I could agree and felt the compromises required for a convertible outweighed the benefits.

So it was settled - a regular 3 Series Coupe; better looking than the saloon and the children are now old enough to clamber into the back by themselves.

We had anticipated having to set aside several weekends to trawl through the internet looking for suitable bargains, but on a visit to my parents', a neighbour who had run a BMW dealership until his retirement offered to drive me round to his preferred supplier, Mark Edwards of Rockvale.

As a city, aside from its more affluent suburbs, Stockport is a pretty unprepossessing place even at the best of times and I do not have much fondness for it at all. Situated in a light industrial area near the railway line and the municipal tip, Rockvale is located in one of its least attractive areas - so at least my hard-earned pennies would not be needed to cover the rental costs of fancy premises.

On my first visit, I spent about an hour with Mark viewing stock as he explained how he works - ex-BMW himself, he employs only ex-BMW technicians and buys mainly from BMW GB at auction.

The deal, as the neighbour had expressed it, was that you tell him the car you want and the price you can pay and he goes out and gets it if possible, so we agreed our price range for the new car, including the value of our own car to be taken in part exchange and the sort of thing we were looking for.

Any reservations I had about dealing with a complete stranger, albeit a very friendly and charismatic one, in an unglamourous part of Stockport were put aside by two things - the connection with my parents' neighbour, the ex-BMW dealer, and the fact that when I checked his prices against similar cars on Auto Trader, he was no more expensive than private sellers.

Another reassurance for us was that we would not be required to pay a deposit or even commit formally to buying the car until after Mark had taken delivery, so he would need to buy a car that was good enough to sell on to someone else if for any reason we decided not to purchase.

I had originally planned to go for the 3l diesel on the basis of the huge amounts of torque it pumps out - the 530d, for example, costs half of the M5 yet has more torque.

However, advice from Mark was to avoid the diesels as more prone to problems than the petrol engines and instead go for the de-tuned post-2007 3l, badged as a 325 and cheaper to tax due to its lower emissions (he similarly dismissed the M3 as "fun for the likes of Jeremy Clarkson on a track, but several times more expensive to run than a standard 3").

So, we put our order in and waited. And waited. Occasional emails to Mark elicited the response only the the market was very quiet and he had not seen anything suitable.

Eventually after what seemed like ages, but was in reality less than a few months, I got an email saying two suitable cars had come up at auction and was I interested.

After a quick call with Mark about both, we agreed which was our preferred choice, and that he would bid for them with the aim of buying one at a price that would allow him to re-sell to us with a sensible profit margin - all very gentlemanly and very hassle free.

When Mark came back with the news that he had managed to get the car, the only thing left to do was view some photos of it online, decide that we definitely wanted it, pay the deposit and arrange a trip up to my parents' to carry out the exchange.

Whilst I am hardly a car-buying veteran, this was by far the easiest vehicle purchase I have ever made, with no need to trawl the internet, making price comparisons, vetting sellers or even viewing in person. And I got to sell the old one at the same time for a reasonable sum and zero hassle.

The car itself is low-mileage with lots of extras and in mint condition - probably better than we would have found for ourselves had we gone down the more normal route of looking through autotrader.

Behind the wheel, it looks and feels very similar to the old 5 Series - I tend to find myself noticing the small differences.

With a shorter wheel-base and run-flat tyres, the ride is slightly firmer, and there is less feedback via the steering wheel, but it corners better.

The pedals are closer together, so I sometimes find myself hitting the wall of the footwell rather than the clutch.

The children think the sun-roof is great, whilst Mrs CWB appreciates the park-distance sensor.

With run-flat tyres, there is no spare wheel (the old 5 carried a full-sized one around all the time), so boot-space is correspondingly better.

Minor niggles include a gadget that pushes forward the front seat-belts when you start the engine, but rarely works properly (why not just put them in the seat back as on the convertible ?) and an annoying "suggested gear" display on the dashboard that silently but almost constantly insinuates that I am over-revving the engine.

And despite the car being smaller and newer than its predecessor, it doesn't feel quite as quick off the mark as I had hoped.

Partly, that's due to me having owned a number of motorbikes, as there are very few cars that can challenge a bike for sheer accelerative thrill, and those that can are either effectively bikes on 4 wheels or well out of my price range.

Having owned our first two cars for 6 and 9 years respectively, I feel I am still getting used to this one - a holiday in the south of France this summer should help with that - and we have not even thought about how long we'll keep this one for.

But, whenever the time does come to replace it, we'll be picking up the phone to Rockvale.