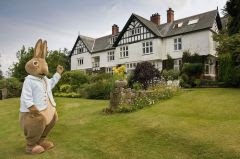 Last summer, we decided to tack an extra day onto a family holiday in the Lake District and booked ourselves into the Lindeth Howe Hotel overlooking Lake Windermere which, according to its website, is a unique 4 star country house hotel once owned by Beatrix Potter and boasting 34 beautiful bedrooms, cosy lounges and award winning 2 AA Rosette dining.

We had spent most of the week at the very lovely Langdale Estate and would gladly have had an extra night there; however, booking a family room for a single, high-season weekend night was not possible either at the Langdale Estate or at any of the other half-dozen or so places we called - until we got through to the Lindeth Howe, who kindly agreed to break with their usual policy and allow us a one-night stay.

Having grown up in the north of England on the edge of the Pennines, I have an affection for hills and moors that I can't readily explain and which I miss greatly in my adoptive and very flat home town of Cambridge, so every visit to Langdale in Chapel Stile with its views of the Langdale Pikes seems to bring about in me a sense of hazy wistfulness brought about by gazing at a dramatic skyline of rugged hills, gently swaying trees and sonorous flowing brooks with patterns of light and shade.

If it sounds idyllic, that's because it is, but the Lake District has its more commercial and, yes, child-friendly corners, with boat trips, ice-creams, fish and chips and so on.

The Lindeth Howe, set in leafy foothills just up from the Hawkshead Ferry is closer to the tourist destination of Bowness than to anywhere more dramatic, but occupying a grand house and set in acres of gardens, it still has very much a sense of place and looking out from any of the genteel sitting rooms on the ground floor, there are views only of lawns and tree-tops.

The walk into Bowness via a shortcut through the garden takes only about half an hour, whilst the ferry itself is easily reached in about ten minutes and provides both views of the Lake and the excitement of fresh air and a new mode of transport for young children.

Smart and with a touch of old-school formality, the hotel is welcoming and as child-friendly as such a place can be - there is a small swimming pool and children's meals are available in the restaurant, but don't expect any soft-play areas, entertainers or mini-discos.

However, after a week of running around in the fresh air and eating pub lunches, we decided it would be appropriate to give our two the experience of a formal dinner and so booked to eat in the restaurant.

Sitting in high-backed chairs in the bar area, we ordered drinks, nibbled canapes and perusing the menu and more importantly, the wine list.

Intrigued by a multi-course "trio" tasting menu, I ordered for ourselves and chose a half-bottle of Chablis from Domaine Pascal Bouchard, whilst Mrs CWB established that the children would like something with chips.

As we were led through to our table in the dining room, the children immediately picked up on the quiet hush of formality and responded with impeccable behaviour - in fact, they rather enjoyed the ceremony of chairs being pulled back for us and napkins being opened with a flourish and elegantly draped over our laps, before choosing from a basket of bread rolls and tucking in.

As an amuse bouche, the adults were brought a "fruit soup" in a shot glass with a dainty caviar spoon - I can't say for sure what was in it, but it seemed to be a refreshing blend of tropical fruit purees with just a hint of spirit, such as Cognac or whiskey.

The waiting staff helpfully arranged to bring the children's mains with our starters so that they were not left waiting and stuffing themselves with more bread.

Our trio of fish starter was a perfectly-cooked, sweet scallop with a spiced risotto, a garnished slice of smoked salmon with caviar and a Bloody Mary shot, which were all superb and matched well with the crisp acidity of the Chablis.

Meanwhile, the children were very pleased with their respective burger and fish and chips which I checked out in return for a bit of scallop and also found to be well-made.

After a hearty pub meal at lunchtime, we were already feeling a little full by this point so a refreshing fruit sorbet (inevitably shared with the younger members of the family) worked the trick before before our main courses arrived.

The trio of mains was a delicious parcel of lamb wrapped in a cabbage leaf, a dainty lamb wellington and, only slightly less convincingly, a lamb dumpling.

Our delicious trio of desserts was a vanilla panna cotta, a mini sticky toffee pudding, and bitter dark chocolate mousse and the only challenge was avoiding the temptation to dive straight into the chocolate dessert, but rather to eat them in order of increasing intensity and sweetness.

The children's desserts of chocolate brownies with ice-cream were also delicious - and I can say this authoritatively as they actually struggled to finish them.

Finally, the trilogy of Cumbrian cheeses was brought out - a Blengdale Blue with oaties, a Ribblesdale with sesame biscuits and a Gurney's Gold with salted cracker.

At this point, #1 child announced herself full and ready for bed and, as any parent will know, this is just too much of a result not to be taken up immediately. So, Mrs CWB who was also struggling to finish off her cheeses, whisked her off for bedtime preparations whilst I continued to supervise Young Man and his ice-cream.

#2 child, being four years younger than his sister, has all the stamina and stubbornness of his age, but not long later he also admitted defeat both on his pudding and more generally, asking to be taken back to our room for bed, so I did what any devoted father and husband would: ordering my coffee to be taken in the lounge, I quickly got him upstairs and into his pyjamas, before heading back downstairs to settle myself on a sofa for petits fours and a pot of decaff, whilst flicking through the weekend papers and gazing out of the window at the relentless rain which had started earlier in the afternoon and not let up since.

And thus reposed, I spent a very pleasant hour or so of child-free, carefree bliss, before arriving at the advert section of the paper's magazine with glossy pictures of expensive rail-journeys through the Canadian Rockies, Baltic Cruises and a breathlessly enthusiastic half-pager for some Spanish wine I'd never heard of but which was apparently such a bargain that I really should snap up a case of it - and get a lever-action corkscrew thrown in - right now before it's all gone.

So, putting aside Tony Laithwaite's over-enthusiastic sales pitch for underwhelming wines, I drained my last cup of coffee and headed upstairs.

The next morning, the heavy rain had given way to mist and light rain, and we took breakfast in the restaurant as late as possible, as we were still full from the night before.

Sitting by the window, we were served a wonderful, and filling, breakfast of toast, pastries, coffee, juice, cereals for the children and scrambled eggs with smoked salmon for the adults.

This was followed by a cursory exploration of the hotel including two birdcages with finches and canaries, a trip to the swimming pool for the children whilst Mrs CWB packed up and, back in our room, some children's TV for the kids with elevenses of the hotel's complimentary coffee and biscuits for us.

On a clear day, the views from the upper floors of the hotel over the lake must be spectacular, but a drizzly aspect over the car park from the Family Room does nothing even for an Old Romantic like me, so we did not linger for too long and instead took a stroll in the fresh air around the formal gardens before settling up and heading off to an indoor and outdoor play area to calm the kids down before the long drive back to East Anglia.

To me, British food and our attitude to food is, in places, undergoing something of a quiet revolution, with the rise of farmers' markets, British artisan cheeses and restaurants taking traditional British dishes and refining them just enough to be elegant rather than hearty.

As a nation, we have a great heritage to draw upon and to me, the Lindeth Howe is part of that movement, mixing traditional foods with a touch of refinement, presented elegantly with a genteel style of service that is formal but not stuffy.

It's not the edgiest of approaches, but if you want edginess, then the hikers' and fell walkers' mecca that is the Lake District is probably the wrong place to be looking for it.

Transplanted to London, or even Cambridge, the Lindeth Howe's lack of irony or knowing humour might seem somewhat pedestrian, passé or too-school-for-cool, but in the setting of the Lake District it is a lovely reminder of a more genteel age, with enough of a concession to modernity to feel relevant.

A family room with bed and breakfast at the Lindeth Howe Hotel costs around £260 per night, with (normally) a minimum stay of two nights at weekends in season.