The Launch of Barry James Wines 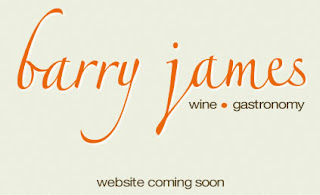 At the Boutique Wineries event in London earlier this year, I was very impressed with a Marcel Deiss Nature presented by Barry McCaughley.

We exchanged business cards and arranged to keep in touch, but the opportunity to chat in more depth came sooner than I had expected as he shortly invited me to meet up and talk about his new venture, Barry James Wines.

As a result of a minor sports injury, the meeting took place in a chic, post-modern flat in Bermondsey as Barry (pictured, right) hobbled around on crutches picking out wines to try and I warmed to him increasingly when he suggested we try some wine first from his Barry James range and before getting down to business.

Most fizz - with the possible exception perhaps of Prosecco - is defined by its relationship to Champagne whose crisp apple acidity and yeasty brioche aromas and whose pricing set the benchmark for this category.

I had never heard of Franciacorta until I recently learned it was the sponsor for this year's European Wine Bloggers' Conference in Brescia, but it is perhaps set to become the Next Big Thing for fizz as it uses Champagne grapes and methods and has a cool climate with chalky soils.

This wine spends 48 months on it lees and is a golden colour in the glass. It has a fine mousse and a yeasty, Pinot-esque nose (although it is actually 100% Chardonnay).

On the palate, there is citrus and orange blossom, a creamy texture and some vanilla but more than that, it has a cool climate food-friendliness and is very lovely.

Originally a recruitment consultant in the city, Barry has a blue-chip, high-flyer background, but decided that corporate life was not for him and is now something of a serial entrepreneur in the wine trade.

He describes the "career" phase of his life as great training for what he is doing now as that is where he learnt all his commercial and business skills - clearly as well as the tenacity and people skills needed to succeed in the recruitment business.

Eight years ago, he set up Wineaux as an internet-only wine retailer and it bobbed along reasonably for several years until a transformational contract to supply all of Mitchells and Butlers with a certain Prosecco took it from a 5-figure outfit to a multi-million pound business.

Pinot Blanc may be considered the least of all the Pinot varieties, but I rather like its focused crispness and the way it gains weightiness over time.

Barry's story for this wine, which hails from the hilly Italian borderland near Slovenia is that 85% of the wine is sold on the doorstep by the winery owner, the eponymous Doro Princic himself, who is best described as "a character", alternately refusing to sell any wine to passers by and then offering a lavish spread of food prepared by Senora Princic.

The winemaking sticks close to "natural" principles - it is unfiltered and made from free-run juice fermented in tank and apparently Jean-Marc Deiss of Marcel Deiss rates this wine very highly, which is praise indeed.

And it is somewhat Alsatian in style, with white stone fruit, crisp apples and pears, and then with air progressively beeswax, flintiness and a floral softness.

It feels fuller on the palate, with rounded, mouthwatering, pear-fruit acidity, a touch of lemoniness and a greater savoury depth of flavour.

On the finish, there .are more apples and pears but predominently a persistent minerality.

Match with raw langoustines or sushi.

If Wineaux has a broad-market approach, XV is Barry's more exclusive offering; the concept is simple - a word-of-mouth-only club of never more than 100 customers who get the opportunity to buy wines available only in very limited quantities.

It is no mere gimmick, but rather a practical solution to the problem of occasionally coming across a really interesting wine that is not available in sufficient quantities to allow it to be put on the Wineaux site.

Overheads for XV are low as the wine is not actively marketed or put on a website, but merely offered with a brief description to XV members who have to rely on Barry's palate as a guide.

Moreover, sourcing piggy-backs off the back of Barry's winery visits for Wineaux, so there are no incremental costs, meaning lower prices for XV club members, a bit of extra income for the business and an opportunity for winemakers to sell their more limited-availability wines to a regular buyer.

After considering but rejecting a clutch of crowd-pleasing wines grown by the Benetton family, owners of the eponymous fashion hose perhaps more for tax reasons than oenological ones, Barry opened up a Fumin from the Valle d'Aoste.

Not to be confused either with Fumé Blanc or Furmint, this is a red wine made by Ellio Offin that is unfiltered and organic in all but name.

With a slightly funky nose and cherry fruit, it is a crowd-pleasing easy quaffer that you could happily drink all day.

The tannins are soft and it has a smooth texture with rounded acidity that comes from phenolic ripeness.

Whilst Barry is a serial entrepreneur, all his businesses are fundamentally the same filling, just in different wrappers.

Wineaux gives him volume whilst XV is an outlet for wines that would be uneconomic to sell via his website; Barry James Wines is his B2B offering aimed at mid-sized, multi-site retailers such as independents and small chains.

If most people go into the wine business because they love wine, it takes someone with a corporate background to address the rather duller, but perhaps more significant issues around inherent inefficiencies in the industry such as logistics and supply-chain management.

This then is the world of pragmatic business-people who like wine, rather than poets, dreamers and lushes who think running a business can't be all that difficult and for whom "being commercial" is a derogatory statement.

In short, with Italian distributor Cuzziol as a backer, Barry James has set up a central logistics hub in Treviso where orders for over 400 Italian wines can be put together and then delivered straight to customers without any UK middle-men or warehousing facilities.

Obviously there is an element of fixed, minimum cost to freighting goods from Italy to the UK but as Barry explains, there are no middlemen, no minimum orders and the premium Italian wines we sell come directly from the producers who are vested in the business themselves.

If the idea is, in its own way, quite revolutionary, by-passing the whole importer and distributor network at a stroke, it is also part of a growing trend of looking at the wine business model and finding ways to improve and streamline the business side without having an adverse effect on the production side.

For that reason alone, it deserves to succeed, but it also helps that the wines are rather good, too.