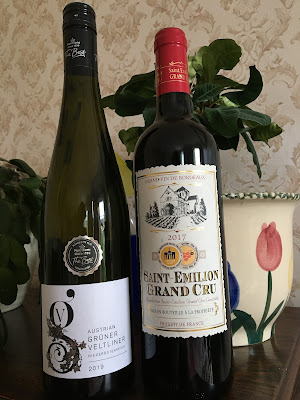 An Austrian Crisp White from Morrison's and Big Red from Lidl

Bordeaux was my first oenological love - we had taken a weekend break to northern France in the car and decided to bring back a few bottles with us. They cost the equivalent of a few pounds each and I had plucked them off the shelves pretty much at random, but back home every bottle we opened was at least thoroughly enjoyable if not rather better and I realised that I actually liked wine (or French wine bought in France, to be specific) a lot more than the generic UK-brewed beers and lagers I had previously consumed.

Not long afterwards, I took on a high-travel role that saw me visiting Vienna most months; to fend off the boredom of endless evenings with just a newspaper's business pages for company in one of the world's great cities, I started eating (and drinking) at slightly better restaurants and developed a taste for Michelin-quality food and high-end Austrian wines.

It's easily done when the company is paying for you.

So, Austrian Gruener and red Bordeaux remain my go-to for a brace of enjoyable wines to accompany a meal.

I met Markus Huber a couple of times at various tastings and was impressed by the quality of his wines - for Morrison's to get his wine and stock it at around £7 is no mean feat.

This purchase was a chance find - I happened to be in Morrison's and it happened to be marked down by a few pounds; I now wish I'd bought more, but I can say that of many wines in my makeshift cellar and I still have more than I can get through.

The Lidl Bordeaux was recommended by Richard Bampfield MW; I have reviewed it previously, but the 2017 now has a bit more bottle age and can be viewed with some perspective.

I bought  a case each of the 2016 and 2017 when they were on special offer; the '16 is the better vintage but the '17 being lighter and fresher is ready for drinking sooner (on this tasting, it will still benefit from a few more years).

I decanted the red around an hour before the meal; with hindsight, this was too little. It can take (and will benefit from) several hours in the decanter to soften the tannins and allow the fruit to come to the fore.

The Gruener was chilled and aerated; it shows well on first pouring and doesn't require decanting, but  it does improve greatly with more air.