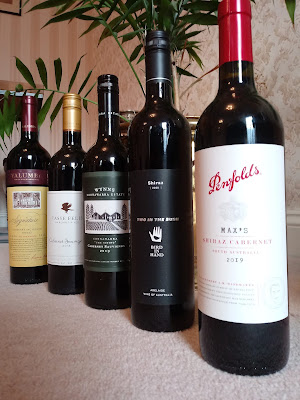 A five-way Australian Red-Off: three wines from Tesco, plus Yalumba and Vasse Felix
Once a byword for "sunshine in a glass", that became increasingly monolithic fruit bombs, Australia is discovering European-style fresh, savoury complexity.
Here are five Australian reds that have plenty of easy-to-enjoy fruit, but also enough complexity, and food-friendly freshness.
More a continent than a country, Australia is not only one of the few places that can successfully make varietal Cabernet Sauvignon, without the need for blending, but actually has two areas where Cab thrives - Coonawarra in South Australia's Limestone Coast and Western Australia.
These five wines are are a mix of:
- two varietal Cabernets
- two Cab-Shiraz blends and
- one varietal Shiraz
Cab-Shiraz Blends
Penfolds Max's Shiraz Cabernet, 2019, South Australia (£20, Tesco) 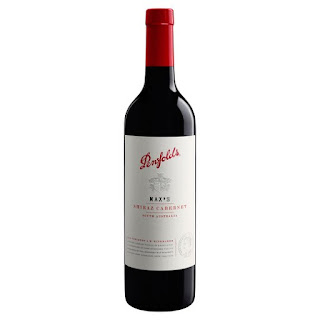 Yalumba, Australia’s oldest family-owned winery has been making Cabernet-Shiraz blends for over half a century. The Signature was first made back in 1962, taking inspiration from Bordeaux winemakers who added small amounts of ‘other’ grapes to bring out the best in their cabernet wines.
Yalumba’s winemaker Kevin Glastonbury, who has been making The Signature for more than 20 years, describes it as a “Yalumba icon”. Every vintage of The Signature is individual, each reflecting the influence of vineyard differences and vintage conditions while maintaining a high level of quality and bringing The Signature landmark style.
The Signature is made using the best fruit of the vintage. The Cabernet Sauvignon, which makes up 53% of the blend, comes from four vineyards in the Barossa Valley and provides the rich, lifted Cabernet Sauvignon aromatics and palate structure for which The Signature is renowned. The Shiraz components include plantings of varying vine age; the oldest were planted in 1925.
tarry-plummy dark fruits, minty eucalyptus, florality and complex oaky spice and sous bois; fresh and inky with black olives, ripe black and bramble fruits, cassis, sage and scrubby garrigue herbs, graphite and supple, very fine, rounded and well-integrated tannins. Dense and concentrated, deft and nuanced with very fine detailing. Very long.
Very Good.
Drinks nicely on first opening, opens up with extensive aeration and can be cellared for up to fifteen years.
Suggested food match from Yalumba: ham with a sweet orange and mustard glaze, served warm with some crusty bread and a glass of Yalumba The Signature 2016.
Match the sweet and salty flavours with the balance and fruit sweetness of the wine; this is a perfect classic festive food and wine pairing.
For festive glazed ham, in eight easy steps, see the recipe below and watch Robert Hill-Smith and Nick Waterman cook their version here:
Varietal Cabernet Sauvignon
Wynns The Siding Cabernet Sauvignon, 2019, Coonawarra (£15, Tesco) 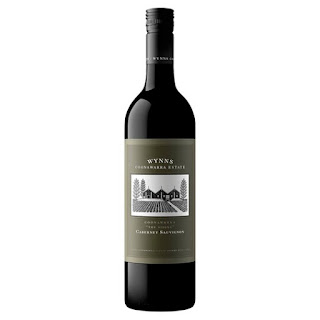 Vasse Felix made their first Cabernet Sauvignon in Margaret River in 1972, from the vines planted by regional pioneer Tom Cullity in 1967 when the winery was first founded, and this wine has been made every year since.

The blend also includes some Malbec and Petit Verdot. 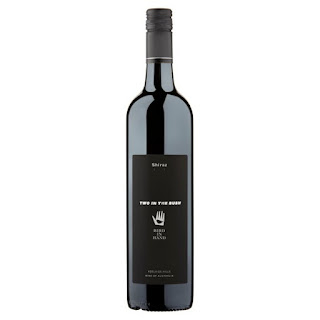 Made by Master of Wine Kym Milne.
Aged in tight grain French oak for 16 months, our 'Two in the Bush' Shiraz has rich aromas of vanilla, blackberry and a hint of chocolate which resonates on the palate. This medium bodied Shiraz displays the elegance and complexity of cooler climate red winemaking.
This cool climate Shiraz was harvested early in April from a hot, dry summer followed by a particularly mild autumn. These conditions favoured more medium bodied, structural and aromatic red wines. Made using open fermentation vessels this Shiraz was then aged in new (20%) and older French oak barrels for 12 months.
Situated in an area of the Adelaide Hills that was littered with goldmines in the 1800s, the Bird in Hand winery was purchased and planted in 1997 by Andrew Nugent. Andrew has kept the close historical links alive both in the naming of the winery and their wine ranges; Two in the Bush and Nest Egg were the names of mineshafts in the Bird in Hand goldmine. From vineyards in Woodside and Clare, Bird in Hand produce classic examples of cool climate Chardonnay and Shiraz that have won world acclaim.
The seaside influence of the Gulf of St. Vincent, the cloud-trapping rise of the Mount Lofty Ranges and plenty of Australian sun all combine to create a special diurnal temperature shift that the grapes love.
juicy black fruits, cassis, black cherry and blackcurrant with black olive, pepper and aromatic green herbs; juicy, fresh, pure and supple with very fine, well-integrated tannins.
Good.
Very closed up on first opening; benefits from extensive aeration and will repay some cellaring.
Match with roasted red meats, such as garlic-and-rosemary lamb shoulder.