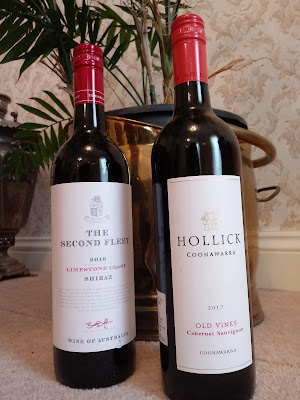 Two reds from South Australia's Limestone Coast
Australia has not historically focused so much on the concept of terroir, that somewhat undefinable "sense of place" that is untranslatable from the French.
It was, after all, the country that gave us varietal labelling and told us that the Chardonnay in your glass was the same grape as you get in a White Burgundy.
However, as the country matures, certain sites prove to be better than others for winemaking, so labelling by location as well as by grape variety starts to make more sense - especially for the more ambitious wines that convey a sense of place rather than just "sunshine in a  glass".
As one Australian winemaker once told me: Australian wine needs to get big, or get fine.
The Limestone Coast is in the south east of South Australia. and consists of a number of sub-regions, including Coonawarra and Wrattonbully.
It does not quite equate to a European region in the sense of ever-more specific names ranking higher for quality, such as Bordeaux -> Medoc -> Pauillac. Rather it is more of a general, loose geographic grouping with a shared geological history.
Halfway between Melbourne and Adelaide, the greater Limestone Coast Region was historically submerged under the sea for over 25 million years, during which time marine crustaceans and shells on the sea floor formed limestone reefs.
Approximately one million years ago, the region began rising out of the sea; as the sea receded, it left in its wake fourteen stranded coastlines or ranges between the Naracoorte range and the current coastline.
Wind-blown organic material accumulated on top of these limestone reefs and formed the famous terra rossa soils found particularly in the Coonawarra and Wrattonbully wine regions.
The Second Fleet Shiraz £ 6.99 (90 BampWine Points)

Being close to the ocean, the Limestone Coast has a naturally cool climate, giving this Shiraz a fine, peppery freshness.
Dark berries and black fruits with tobacco, liquorice and oaky spice; full and supple.
Good.
Match with grilled meats, pepper steak or an earthy wild mushroom tart.
Hollick Old Vine Coonawarra Cabernet Sauvignon (£17.50)
At four years old there is already some bricking of the colour and aged aromas.
Dark fruits, spice and complex leathery sous bois; ripe, slightly baked dark berry, plum and cassis fruit with leathery tobacco, cocoa and spice; warming minty eucalyptus and mouthwatering acidity. Very fine, gentle tannins, very harmonious.
New World fruit and New World ripeness with Old World complexity.
Drinks nicely on first pouring as a sophisticated ripe quaffer; the complexity becomes more apparent with a little aeration as the overt fruit blows off.
Good.
Match with barbecue foods or red meat stews.
From the Hollick Estates website:
Coonawarra Winery and Cellar Door, Coonawarra Wines | Hollick Estates
Hollick Old Vine Coonawarra Cabernet Sauvignon – Latitude Wine & Liquor Merchant
Hollick Estates is a boutique winery located on the famed terra rossa soils of Coonawarra. Renowned for their extensive range of premium table wines, including several alternative varietals. All of which can be sampled in Cellar Door.
The Hollick Estate's cellar door oozes charm, a charming stone cottage leads the way toward the tasting room and restaurant where a wall of windows overlooks vines planted by Ian and Wendy Hollick. Their three primary vineyards are Neilson's Block, Wilgha, and the Red Ridge vineyard in Wrattonbully (developed in 1998).
The fruit for the Cabernet Sauvignon is selected from old vine material from the Wilgha and Neilson's Block vineyards at the cooler, southern end of Coonawarra. Located on the famous terra rossa soil, these vineyards were originally planted in the 1970s and early 1980s.
It will effortlessly cellar for at least 10 years.
The wine was matured in French oak, adding to its structure, but not dominating the pure Coonawarra Cabernet fruit characters.
Tasting Notes
Aromas of blackcurrant and mulberry fruit provide the introduction to lingering chocolate and spicy fruit. On the palate blackberries & plums, with a touch of spice. A mouth -watering wine. The subtle tannins provide balance whilst the lingering chocolate adds an elegant finish. Serve alongside steak with roasted piccolo tomatoes, rocket salad and shaved parmesan.