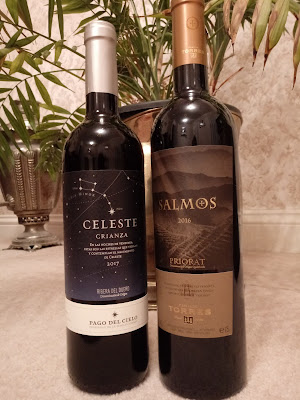 Two Torres wines from Spain: Celeste Crianza and Torres Salmos, both available at Waitrose
Torres is one of the great winemaking families of Spain; these two reds are world-class wines at affordable prices.
Torres Celeste Crianza
Celeste Crianza was the first Familia Torres wine to be made in Ribera del Duero, at their Pago del Cielo estate. The vineyards lie at an altitude of 895m on the edge of climatic viability, where day to night temperatures can vary by up to 20 degrees.
The resulting freshness and acidity is reflected in the character of the wine. Made from 100% Tinto Fino, the regional name for Tempranillo, the wine is aged for 12 months in French and American oak barrels with similar length of ageing in the bottle before being released.
Serve between 16-17 degrees, around half an hour in the fridge before serving should do. The name of the wine, Celeste, is a metaphor for the closeness between the wine and the stars, with its label depicting the night sky as seen from the winery during the September harvest.
Torres Celeste Crianza 2017 (£12.99, Waitrose) fresh, vibrant, juicy cherries, black fruits, black olives, cocoa and balsamic with peppery, oaky spice and very fine, well-integrated tannins; dense, concentrated, structured and precise; harmonious and poised.
Very Good.
Match with beef Wellington, roast fowl or red meats or vegetable dishes such as sautéed mushrooms, stuffed aubergine or peppers.
Torres Salmos 2016
Torres Salmos pays homage to the monks of the intrepid Carthusian order, who arrived in Priorat in 12th century, and began to cultivate vines there. In 1835, a violent crowd destroyed the monks’ work and ransacked the monastery and the monks fled. Phylloxera completed the virtual destruction of winemaking in the area, until it began to be revived again in the 1950s, but its recovery really only took off in the early 1990s.
Priorat is renowned for its steep impoverished rocky slopes of black slate-like ‘llicorella’ soils, that the grapes seem to love and which gives the wines its particular ‘graphite’ or mineral character.
In 1996, Torres entered the region, purchasing vineyards and land, and Salmos, the first wine made from Torres’ vineyards, was launched in 2007.
Salmos is a blend of mainly Cariñena, and Garnacha, with a pinch of Syrah, from the family vineyards located in Porrera and El Lloar.
2016 was a hot, dry year, and the unique soils infused the wine with plenty of character and minerality.
The result is a lovely deep coloured, medium-bodied red wine with lots of beautifully balanced fruit, toasted French oak and a subtle hint of cedar. The palate is firm, lively, and flavourful, with elegant, velvety tannins. It’s a good match with wild game and red meat, and especially delicious with a slow-roast leg of lamb.
Salmos 2016 was recently named the best in Priorat after a blind tasting at the prestigious International Wine Challenge and winning the Priorat Trophy, the highest regional award given in one of the toughest and most influential competitions in the wine world.
Torres Salmos 2016 (£21.99, Waitrose Cellar, Farnham Wine Cellar, Sandham Wine Merchants) dusty, dried sour cherries, tarry black fruits, plums and forest berries with toasty / grilled flavours, licorice and anise, leather and sous bois, cedar, cocoa and spices; supple, harmonious and well-structured. Complex, concentrated, inky and long.
Very Good.
Still very youthful at four years; needs several hours' in the decanter or several years' cellaring to show its best.
Match with plain roast red meat - or venison when mature.