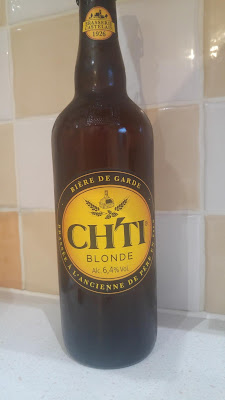 Driving holidays in France are an opportunity to bring back a few bottles of wine; this summer we mixed it up a bit with cider and beer as well.

North East France is too cold for grape cultivation, but as in neighbouring Belgium and Germany,  the French make an art form of producing beers with a strength and complexity beyond mere quaffers.

Ch'ti, by the way, is slang for this part of France - as evidenced by the comedy film, Bienvenue chez les Ch'tis (translated as "Welcome to the Sticks") about a man who is moved by his firm from the south of France to the North where it is very cold, rainy, and "they talk funny".

This beer is marked as a "biere de garde", a beer that will also improve with aging - even if this one did not get the chance.

Ch'ti Blonde (around €2 for 75cl, Intermarché) 6.4% alcohol; a strong, malty blonde ale, rich with some balanced sweetness and gently hopped for aromatic bitterness; fresh, supple and yeasty with mixed fruit and some sweet spice. Adept and complex.

Match with sausages, tarte flambee or picnic food such as pork pies and cold cuts.