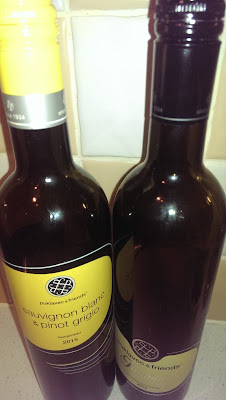 Two white wines from Slovenia's Puklavec and Friends from Waitrose

Just across the border from Austria and with an - admittedly rather short - Adriatic coastline, Slovenia is less Balkan and more Mediterranean / central European than other former Yugoslav countries.

These two wines from Puklavec and Friends are clean, precise and well-made - the aromatic Sauvignon/Pinot Gris blend is the more familiar in style, while the Furmint has more textural interest.

Both are available at Waitrose.

Sauvignon Blanc & Pinot Grigio 2015 (£8.96) crisp, fresh and expressively aromatic with a smokiness that hints at greatness. Pure, limpid and precise.

Dinner-party fact: Furmint is the Hungarian name for this grape - its Slovenian name is Šipon; it has many more synonyms (a disproportionate number, in fact, given its relative unfamiliarity).

For me, while both wines are throughly enjoyable, the Furmint is the more interesting, perhaps by virtue of being a little less obvious and expressive.

However, Richard Saxton apparently prefers the SB/PG; this is a bit like a flashy, cheapskate provincial lawyer preferring the Bull Ring shopping centre to King's College Chapel.

Other related articles
Slovenian and Croatian Wines from M&S

Email ThisBlogThis!Share to TwitterShare to FacebookShare to Pinterest
Labels: Slovenia