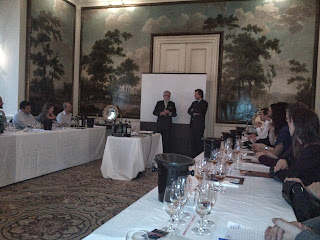 Chances are, when you go to buy a bottle of wine, you probably think of a grape or a region - a Chardonnay or a Bordeaux.

Maybe you go a bit further and think about terroir and how it is expressed by certain grapes - Central Otago Pinot or Napa Valley Cab.

In any event, you probably don't first think of a production method - oak-fermented white, fortified red.

Production method as a defining characteristic of a wine is not a very fashionable idea right now - their replicable, industrial, inhuman feel seems to go against a belief in a soulful approach to artisan wine-making.

It is not the grape or the soil we revere now, but the winemaker with the passion, vision and downright genius to make great wine pretty much anywhere in the world.

And yet some wines are utterly defined by their production methods - Champagne, sherry, port, amarone, vin jaune.

It is an overstatement, but illustrative, to say that wines defined by their production method are deeply unfashionable.

Champagne is the obvious exception - sherry is becoming the next one. And what these two have done is to tell us a human story, casting aside their unique production method. In the case of sherry, they have had to jettison their past to find their future and command a place on stage with the world's greatest wines.

Madeira is another such wine - defined by its unique production method, it is at best one of the world's great wines and not so much unfashionable as having almost no popular consciousness at all.

But that is changing - at least starting to change; Madeira is starting to raise its profile and may be close to "doing a sherry", even if there are no Madeira bars in London just yet.

It takes time, of course; you start with the trade - the buyers, the sommeliers and the writers, you stimulate interest and build a following.

Like going on safari in an age before mass tourism, a trip off the beaten track to discover and learn about Madeira is not all that easily done - but all the more rewarding for having achieved it.

Email ThisBlogThis!Share to TwitterShare to FacebookShare to Pinterest
Labels: Portugal