A review of Legend of Kremlin vodka

Many years ago, I lived and worked in Russia and Ukraine as a footloose language student.

Based initially in the Urals city of Sverdlovsk - now restored to its original name of Ekaterinburg - I later moved to the slightly milder Ukrainian capital of Kyiv.

In both cities I had a network of friends and was a regular guest at people's houses - there is no Russian or Ukrainian word for a party, you just invite someone round "as a guest" and commence the feasting around a table groaning with food and vodka; this is an environment where beer is considered a soft drink.

The traditional way to drink vodka is to fill up everyone's glasses, say a toast - to welcome the guest, to thank the host or the cook - and then down the drink in one. 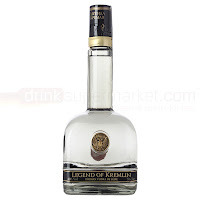 The bitter taste of the vodka is taken away by nibbling on pickled gherkins, rye bread, preserved tomatoes and peppers and so on. Other zakuski (a word meaning "tasters" and equivalent to tapas) may include salamis, fish cooked in egg batter, a beetroot and sour-cream salad known as vinagret, or cold cuts.

Potent, flavourless and bitter, vodka is best matched with sharp, strong foods, such as pickled vegetables, that would overpower a wine.

This Legend of Kremlin vodka traces its history back to 1430. It was not one of the vodkas I drank in my early 20s and I don't recall it being around at all then - perhaps partly because production volumes are relatively low.

However, it has won eleven “Grands Prix” and nine Gold Medals at Russian and international competitions as well as being the provider of vodka to the Kremlin, the state Duma and the House of Government of the Russian Federation

Made from well water and grain spirit in traditional copper vats, it has a characteristic bitter / volatile vodka nose, but feels balanced and elegant.

There is some brief initial sweetness leading on to a smooth, oily, slightly creamy texture, with a pleasant bitterness and long persistence.

It feels refined,balanced and enjoyable - not at all harsh, as some lesser vodkas tend to be. Good.

Around £35 (70cl) from wine merchants, online retailers, Harrods and thedrinkshop.com; provided for review.