Schiefer at the Annual Tasting of Austrian Wines‏ 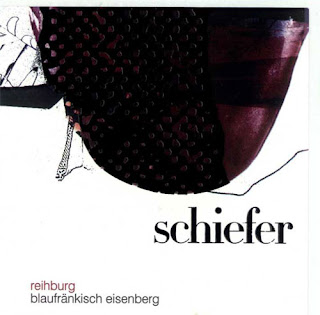 At the Annual Tasting of Austrian Wines last year, I bumped into Jancis Robinson who was focusing solely on reds, leaving the whites to Team JR writer, Richard Hemming.

I have been historically somewhat underwhelmed by Austria's reds, finding them technically well-made but somehow unengaging and a bit, well, straightforward - all cherry fruit and tannic grip, but not much else.

However, as the Schiefer wines had impressed Jancis last year, I was keen to see what I'd missed out on.

According to the blurb, Uwe Schiefer has 10.5 ha of vines in Burgenland on a steep hill with schistous soils called Eisenberg planted with mainly Blaufränkisch. He abstains from modern technology and avoids filtration and fining.

The Eisenberg Blaufränkisch 2009 is pale in the glass with aromas of sour cherry, liquorice and earthiness. On the palate it is complex and intense with cherry fruit, spice, pepperiness and liquorice. It has a prominent, Italian-style acidity and bright fruit with good mouthfeel and a long finish.

The Reihburg Blaufränkisch 2005 comes from a small area of about 1.8 ha of old vines. Darker in the glass, there is plenty of bright, varietal sour cherry fruit and peppery spice. It feels fuller and riper than the Eisenberg, with good grip and minerality on the finish.

The 2004 Reihburg has an intense, concentrated nose with more truffley aromas. On the palate, there is bright cherry fruit, good grip and savoury depth of flavour; a cool mintiness develops and the finish is grippier.

All three wines here were very impressive, and the Reiburgs were definitely a step up in terms of quality and complexity. If you have the budget to try out a £40-ish Austrian red, then you should definitely give this a go.

However, back in the real world, whilst even the supposedly entry-level Eisenberg is not exactly cheap at around £15, it is a more affordable place to start.

The wines are imported by Richards Walford who have recently been acquired by BBR.