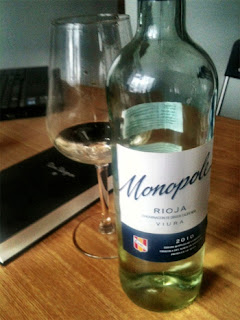 As I have mentioned before, Rioja is much more known for its red wines than its whites; in fact, the same could perhaps be said of Spain generally, so this Monopole Viura made by CVNE is relatively unusual in a number of ways.

Traditionally, white Rioja was a heavy, oaky wine but mainstream Spanish wines are all about freshness and fruit expression these days and so this 100% Viura is made using modern techniques including cold fermentation in stainless steel.

This process reveals the varietal nature of Viura which, in this case, turns out to be a mix of high acidity, herbaceousness and minerality, somewhat reminiscent in some ways of a cool-climate Sauvignon or Grüner Veltliner.

Pale yellow-green in the glass, there are Cox's apples and pears on the nose with herbaceous aromas and a hint of pungent yeastiness.

On the palate, there is more pear fruit and gooseberry herbaceousness, good mouthfeel with rounded, tropical fruit acidity and a creamy feel.

There is also a prominent minerality and leanness with hints of Grüner-esque celery and puy lentils, whilst the finish is herbaceous and mineral.

I opened this up with some colleagues at our after-work wine club; with time, some more unusual aromas come to the fore that we variously identified as russet apple skin, dry straw, swimming pool and cheese - none of this was in any way unpleasant and I think all they all relate to a certain pungent yeastiness that is present on the nose but not the palate.

It feels well-made and balanced but rather unusual, not at all fruit-driven and pleasantly challenging.

I'm surprised at how popular this lean, green mineral wine proves with Wine Club attendees, but a little questioning elicits the information that most have a palate, even if they, by their own admission, lack wine general knowledge.

Curious and elusive but very enjoyable and worth the price is the general consensus.

Drink either as an aperitif or with light starters such as goat's cheese, seafood and lighter fish.

Image credit - from a review by Denise Medrano: http://www.whitewine.co.uk/spain/spanish-white-for-the-spring-monopole-viura-2010/