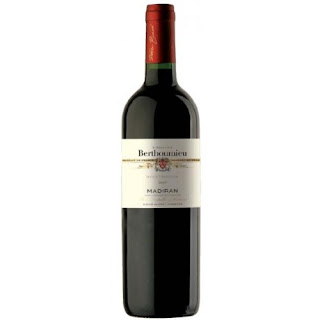 Madiran, in south west France, is perhaps best-known - if it is known at all - for spicy, rustic wines made from the Tannat grape.

A sort-of southerly Bordeaux hinterland, the region seems to specialise in robust, characterful wines with a more wilful personality than anything from its more illustrious northern neighbour.

This 2007 Berthoumieu Madiran Haute Tradition from Vinopic is made from mainly Tannat (60%) with some Cabernet Sauvignon and Fer-Servadou in the blend, but feels like it is trying to emulate a more Bordelais style.

Dark purple in the glass, it shows some hints of brick red hue from five year's age.

On the nose, there is classic left-bank cassis, cigar box and pencil shavings.

The palate is somewhat restrained and not particularly expressive; there is bramble and black cherry fruit with hints of something darker such as liquorice, coffee or soy.

However, the interest here is all in the texture; it feels mellow, inky and rounded, with good acidity and still some grippy tannins on the finish.

It has more finesse than one might expect of a Madiran, but in the process it seems to have lost a bit of character - rather like a visiting eccentric relative on best behaviour.

Having chatted extensively with Vinopic founder, Santiago Navarro, I feel I am starting to get a sense of what makes a "Vinopic wine" with this my second bottle.

Although Vinopic is an enterprise involving Roger Corderer's scientific assessments of wine - the intrinsic score - plus a tastes assessment by Rosemary George MW, I keep coming back to Santiago's comment that he likes food wines from Europe.

This is very much a European food wine, and although smooth and mellow, is definitely not a quaffer; it needs to be matched with a steak or some plain roast beef to make sense - at 13%, it is also relatively low in alcohol and has plenty of food-friendly acidity and grip.

It feels very well-made, in particular the tannins are perfectly ripe, and this is where I think the intrinsic score comes in.

It actually scores marginally higher on the intrinsic measure than the Aglianico I reviewed earlier (100 vs 99), but gets a lower 16.5 from Rosemary vs the 17.5 she gave the Aglianico, which felt to be the more interesting wine of the two to me as well.

Curiously, it is priced at £1 more than Aglianico for essentially the same intrinsic score and a lower taste assessment score, so clearly there is not quite complete egalitarianism at Vinopic just yet.

It has a Decanter commendation which feels about right, if perhaps a little ungenerous.

Finally, it is worth adding that the Vinopic website has had a much-needed make-over and is significantly more straightforward and easier to use than the previous version; the layout of headings and boxes with technical data, background info, Rosemary's notes and so on will now be quite familiar to anyone who already buys wine from an internet-only retailer.