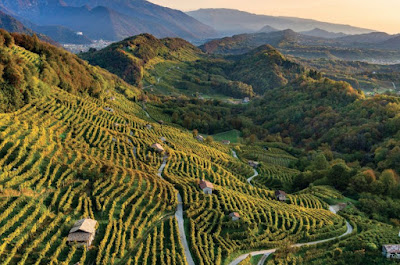 A virtual visit to Prosecco country in North East Italy

I've long held that wine really only makes sense in context. In Europe, at least, wines are more than merely a beverage; they are part of a centuries-old cultural heritage that includes geography and geology, of course, but also climate, agriculture, gastronomy, geopolitics and national - or regional - character.

To understand Prosecco, then, we need to take a deeper dive into the region and focus on the less-homogenous areas that provide all the nuance and subtle differences. 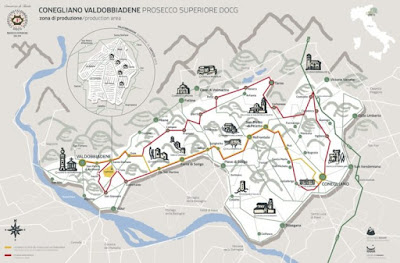 First of all, the what? where? and when?

Conegliano and Valdobbiadene are two towns in Prosecco country, located between Venice on the Adriatic and the Dolomites.

Conegliano is the cultural capital and was awarded UNESCO status in 2019; Valdobbiadene is the production centre.

Winemaking here dates back to Roman times, but for our purposes, it starts in 1876 with the founding of Italy’s first School of Viticulture and Oenology.

The area is hilly, green and varied with winemaking on a small scale; average holdings are just 2.5 hectares of mostly Glera vines. Other permitted varieties can make up to 15% of a blend and include Verdiso (an ancient variety providing acidity and longevity) as well as Chardonnay, Pinot gris and Pinot blanc.

Conegliano Valdobbiadene sits at the top of the quality pyramid for Prosecco; it achieved DOC status in 1969 and was elevated to DOCG in 2009 and is itself further sub-divided into Cartizze and 43 rive. 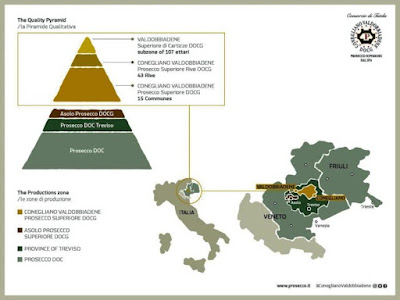 The production method of Prosecco retains freshness and preserves the varietal characteristics of the grapes, resulting in a floral and fruited wine.

Fermentation usually takes around 30 days (with 60 - 90 days' lees aging) using the Martinotti method of in-tank fermentation brought to this region from north west Italy where it was used to make Moscato d'Asti.

The hills of Conegliano Valdobbiadene lie in distinctive East-West hogback rows between the sea and the alpine foothills; they are steep and south-facing at an altitude of between 50m and 500m with vines retained for as long as possible before replacement - at least 20 years and sometimes up to 50 or 70.

All these factors lead to better grapes - the high rainfall and good drainage suit Glera, the southern aspect provides exposure to the sun and breezes provide dryness and prevent pests. Steep slopes mean hand-harvesting and, with so much greenness, cows provide much of the organic fertilisation.

The landscape here is made up of a patchwork in a highly fragmented and interconnected configuration characterized by numerous small vineyard plots, interspersed with wooded areas and unproductive elements, making up an effective ecological network. 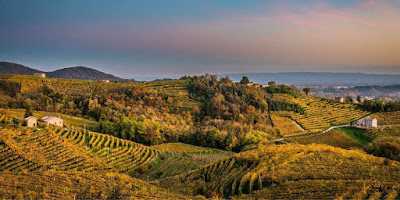 There are five different soil types in Conegliano Valdobbiadene:

Of all areas, the tiny "Golden Pentagon" of Cartizze is the most famous and prestigious; it produces low volumes from old vines with high quality. A narrower temperature range over the growing season makes for more even ripening with highly aromatic wines of ripe pear, stone fruit and florality.

A new designation are the 43 "rive" (ree-vay). If Cartizze is the Grand Cru at the very apex, then the rive are the next-level Cru vineyards; the oldest areas with the highest quality, low production and historic traditions. 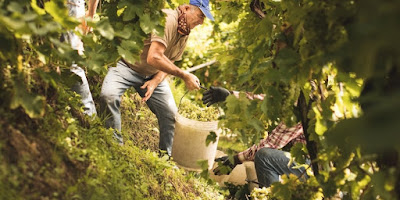 The UNESCO protection of the area recognised three factors:

A region of ancient woods and green valleys with mediaeval castles and fortresses, Conegliano Valdobbiadene has a tradition of fresh, simple foods with zero-miles markets and cichetti, simple mouthfuls of food to be consumed with the local wine in the same way as tapas or pintxos.

There is no olive oil production here and the climate is too damp for air-drying ham, so lardo (pork fat) is used for cooking and slices of garlic preserve the local salamis.

Rivers flowing down from the mountains provide trout and eels, with (unsalted) sun-dried cod landed on the coast near Venice; the hills provide game such as venison, duck and goose as well as mushrooms.

Vegetables are aromatic - chicory, endive asparagus and radicchio di Treviso - herbs are used widely and polenta or potatoes are the staple as well as rice for risotto.

The styles of Conegliano Valdobbiadene Prosecco Superiore DOCG are based on levels of residual sugar, i.e. sweetness. Traditional styles are: 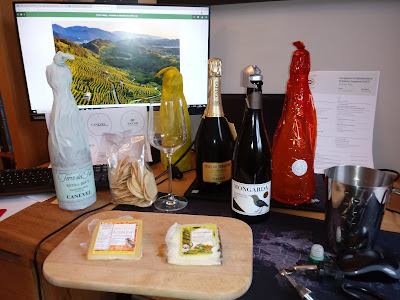 Tasting: five wines to try
Five wines from years, areas, grapes and using different production methods.
La Tordera, Valdobbiadene Prosecco Superiore DOCG Otreval Brut - Rive di Guia 2018 (Asahi)  a high-altitude vineyard, made in the drier Brut style which is increasingly popular. This is actually an Extra Dry wine, but labelled zero-dosage in accordance with regulations at the time. A blend of Glera and Verdiso  from old vines on fossil soils with long fermentation. Yeasty brioche and minerality, citrus and white stone fruit; dry and well-structured; pure, harmonious and long.
Canevel Valdobbiadene Prosecco Superiore DOCG Extra Brut 2019 - “Terre Del Faè” (Berkmann Wine Cellars) a small winery established in 1979 to focus on quality, with everything done in-house. Mineral-rich soils at 200m; made in a Brut style to be more food friendly. Fresh, mineral, citrussy and long with green apple and bitter almonds. Elegant and harmonious.
Valdo Valdobbiadene Prosecco Superiore DOCG Brut Millesimato 2018 - “Cuvée del Fondatore” (cellars of Italy) founded in 1926 and purchased by the current owners in 1938. Developed in the 1980s to show the potential of Prosecco; with late-harvested fruit, this blend includes 10% Chardonnay aged in old oak. Fresh, ripe orchard fruit with citrus and gentle florality; long, elegant, harmonious and structured.
Mongarda Valdobbiadene Prosecco Superiore DOCG Brut 2019 (The Modest Merchant) run by three generations since 1978; an artisanal winery of 12ha in San Martino in the central area. Soft rocks provide minerality and warmer temperatures provide more sapidity than freshness. A single-wineyard wine from south-facing old vines, natural yeasts for the base wine and a short second fermentation to preserve florality c. 2g/l RS. Floral, elegant and mineral with ripe orchard fruits. Long.
Biancavigna Conegliano Valdobbiadene Prosecco Superiore DOCG Sui Lieviti - Brut Nature 2019 (John Armit Wines) a project since 2004 inherited by a brother and sister with 32ha. All the wines undergo a much longer second fermentation from harvest time until spring of the following year. This Sui Lieviti wine looks like cloudy lemonade (unless left to settle for around a week), but has no primary or secondary flavours at all; it is all tertiary flavours from the yeasty lees. Long, savoury and compelling with a strong mid-palate. 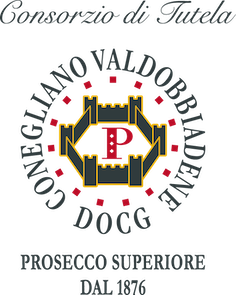