A TV spot from Laithwaite's wine
I have reviewed a number of Laithwaites wines on this blog. Since I used to work in advertising, this time, I thought I would review their latest advert, as tweeted by Laithwaites the other day.

The advert is above so have a watch and see what you think.

Now, what you or I might think of the advert is actually pretty irrelevant; the aim of a TV ad is, at its most basic, to resonate with the target audience for the product in the advert.

TV advertising such as this is by definition mass advertising, so the opinions of one or two people don't matter; it's all about how the great mass of people who see the advert react to it.

What is the advert trying to achieve when seen by a large number of people? Here's a slide from the great Les Binet explaining in the most succinct way I have seen how advertising works. 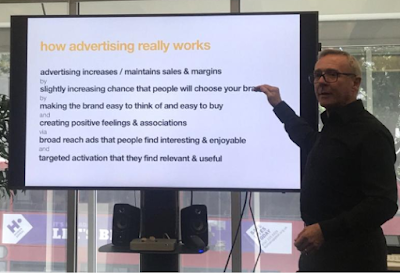 The text reads:
- advertising increases / maintains sales & margins by
- slightly increasing chance the people will choose your brand, by
- making the brand easy to think of and easy to buy, by
- creating positive feelings and associations, via
- broad reach ads that people find interesting and enjoyable, and
- targeted activation that they find relevant and useful
Les' specialist subject is the Effectiveness of advertising. Put simply, Effectiveness is not so much about whether you or I individually like an advert, and more about whether an advert will lead to more sales at higher prices from both existing and new customers.

The reaction from wine twitter to the advert was very positive:

- Anne Krebiehl MW exclaimed: This is actually a LOVELY advert!

- Winemaker Nayan Gowda observed: Hats off to the creative team behind this one.

So, I wondered what people in the advertising business would make of it and tweeted a question about it.

Initial responses were uniformly positive - people liked it for its playful silliness, felt the creative idea was good and that it would resonate with its target audience.

Alternately, consider the adverts for The Economist magazine; these were always witty, wry and slightly superior. You always knew what to expect from an Economist advert and could spot one immediately because it fitted into a recognisable pattern.

Another way to think about the link between the creative idea and the brand is to replace the product in the advert with a competitor product and see if the advert still works. If it does work, then you have a weak advert that is advertising the entire category (here, all wine) rather than specifically for the brand (specifically Laithwaites and no other wine retailer).

As a thought experiment, imagine the advert exactly as it is but with Virgin Wines or Tesco Wines at the end. In this form, the advert would still work, I believe, so it is failing to say anything distinctive and particular about "Laithwaites wine", it's just advertising "wine".

This would be OK if Laithwaites were the dominant player in the market; if you dominate the category (by having the largest market share), then you can advertise the category and as people purchase more in response to your advertising, you will pick up the biggest sales increase.

In the case of Laithwaites, it is not the dominant player in the wine retail market, so it has to grow by stealing market share from other players, rather than by growing the category as a whole. So the advert has to give you a reason to buy from Laithwaites rather from any other wine retailer.

To do this it has to be distinctive - not in any meaningful way, it just needs to create an association between "something" and "Laithwaites", in the same way that "The Economist" = "wry and witty".

A few commenters noted that with a series of future adverts in this style, the company could start to own the playful silliness of this advert and thereby create a distinctive brand personality.

In general, the non-Brits (who are presumably unfamiliar with Laithwaites) struggled the most to understand why this advert says anything distinctive about Laithwaites: "nice idea, but I've already forgotten the brand name" was a common reaction.

A few people went slightly further in their comments; Miguel Ferreira noted "The wine industry is quite conservative. And compared to 99% of wine ads out there this ad MIGHT be distinctive enough to stand out."

Claire Strickett thought it was good, but a missed opportunity to be more innovative: "it plays into stuffy stereotypes about wine and wine world - they're all pretending to be posh, and I'd love wine to work hard to lose its associations with being posh."

Chris Carr felt the advert could have gone further to be more distinctive and memorable: "it's a fun take on the no doubt insight inspired aspirations of average wine drinkers. But I think the execution keeps it in forgettable territory. Could have taken it further into the fantasy of a wine cellar perhaps."

Email ThisBlogThis!Share to TwitterShare to FacebookShare to Pinterest
Labels: General / other, Laithwaites