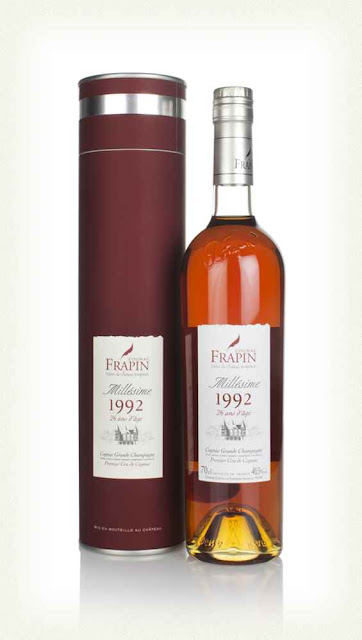 A vintage Frapin Cognac from 1992 with a limited release of just 3,000 bottles,

1992 was quite a year for those of us old enough to remember it; from Bosnia to the Rodney King / LA riots via Black Wednesday and the ERM, a quick glance at the bands of the time tells you everything you need to know about how the world was feeling: Nirvana, Pearl Jam, Manic Street Preachers.

It was also the year that this Frapin Cognac was born, having been distilled with its lees and some pulp, taste-tested for aging potential then sealed in 350 litre Limousin oak casks under the watchful eye of the BNIC and left to mature in Frapin's dry cellars.

In the intervening quarter century, the fiery, raw, angry young Cognac has mellowed into something that Frapin's cellar master Patrice Piveteau describes as "rich but also fresh and fruity". Those of us who stood on the cusp of adult life in the early 1990s might feel we can say something similar of ourselves. I'm not so sure that it is equally true of the world in general, however.

Drink as a digestif or match with a tarte tatin.