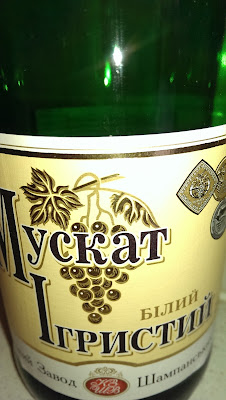 This Ukrainian wine label reveals a lot of information - to those with the relevant linguistic skills.

It is a White Muskat fizz from the "Kyiv Factory of Sparkling Wines"; you must remember that the name dates from an earlier era when this part of the world was less enamoured of the concept of rural, artisan undertakings and when urban industrialisation was everything.

The wine was bottled a little over two years ago, but on pouring reveals itself to be already partly oxidised - topaz in colour with a cidery-yet-aromatic nose, it is almost as if someone accidentally tipped a bottle of vin jaune in the barrel.

This cannot be what was intended but the end result, however unusual, is not at all unpleasant - albeit, you probably have to be the open-minded sort of person who has tried both inexpensive Ukrainian fizz and vin jaune to appreciate the combination.

The acidity is fresh and citrussy, with cidery sharpness and florality; the residual sweetness is perceptible, but balanced off by the acidity. 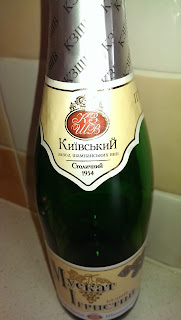 Sealed with a cheap, hollow plastic stopper, it is clearly intended for imediate drinking, and has aged very quickly indeed.

But do rather I like it, in a happy accident sort-of-way.