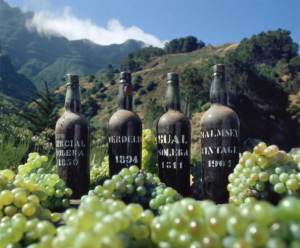 After a week of drinking Madeira, I find myself thinking about this sub-tropical island's fortified wine (and wine in general) quite differently.

- it has the Classic Wine qualities of tasting strong, important and characterful

- it evokes a time when a physical presence, measured by both size and character, was the mark of one's importance

- it has a pre-industrial, pre-middle-class, agricultural physicality, with a rocky, untamed, southern-European intensity

- it matches best with the strong, peasanty foods of this sunburnt, windswept Atlantic isle; olives and strong cheeses, tuna steaks and meat skewers

- by comparison, modern-style fruit-forward wines seem lacking and insubstantial; it is a suit of armour next to business casual, Henry VIII vs Steve Jobs, a stallion beside a smartphone. 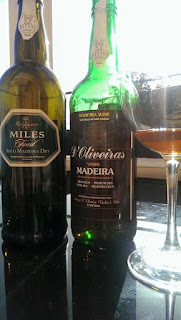 It is so tied up with its sense of place that I can barely imagine drinking it back in the UK, except on a hot summer's eve with the doors to the garden flung open.

Madeira once occupied the place now held by Champagne - the wine of kings and conquest, of celebrations and ceremonies, it marked victories and launched ships. That world has now largely disappeared and, with it, Madeira's ubiquity.

The Parker-Point chasing of big ripeness and intense concentration appears like a misguided attempt to imbue the essence of fortified wines into table wines.

Thanks to MW student Daniela Shelton for the main image, borrowed from her excellent article on Madeira: https://danigongoozler.wordpress.com/2012/10/26/if-you-like-bottled-electricity-you-will-like-madeira-rui-falcao/