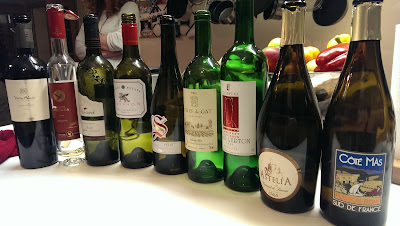 A writer, a collector and student decide to try some leftfield wines.

No it's not the opening line to a joke, it was the premise for an evening of wine tasting to help @winemarathon prepare for her first-year MW blind tasting.

A generation ago, classic wines styles were few in number and relatively consistent, making blind tasting a much easier prospect than it is today.

The MW exam recognises this by awarding marks more for methodology than for the final guess - the task is not so much to identify the wine precisely, but to identify what the key features of what is in the glass reveal about what it could be and what it is not.

I'd shot some of my best leftfield bolts a few weeks earlier with a Cremant de Jura fizz and a vin jaune, but a quick rummage in the samples box turned up an unusual, if entry-level, Coté Mas sparkling Picpoul to which I added a more ambitious Astelia Crémant de Limoux.

Light and citrussy, the Picpoul was a perfect aperitif; the Cremant was weighty enough to match with a starter of caramelized red onion and goats cheese tart. If they weren't the most sophisticated or obscure of wines, it lent a sense of decadence to start with not one but two different fizzes.

From here we moved on to three reds, decanted and concealed, RHCP-style, with socks and played "guess the wine".

#1 smelt aged and complex, like a classic mature Medoc; with high acidity and tannins, it was still not fully harmonious and the nose seemed older than the palate. It turned out to be a 1997 Cab from Argentina.

#2 had more ripe, primary fruit and lower acidity; a classy easy-drinker it was a Clos de Gat 2004 Bordeaux blend from the Judean Hills; the best Israeli wine I have ever had - if that's any sort of accolade.

#3 had the dark fruit, spiciness, inky texture and pencil shavings of a Rhone. Like the Cab, however, something was not quite right - an exotic, heady ripeness and Arab-bazaar spices. It was a Moroccan Syrah.

The trainee MW's choices proved to technically superior wines but lacked the offbeat quirkiness of the previous three - this affirmed a nagging reservation I have long harboured about formal wine qualifications. That said, both were relatively young and neither had been decanted and I felt were not quite showing their best.

#1 a Coonawarra Merlot led to a discussion on how to spot Merlot; for me, the hallmarks are coffee grounds and cherries, smells better than it tastes.

#2 Fox Creek Cabernet from McLaren Vale; I rarely get excited about varietal Cab, especially from the New World. Too often it seems that the blackcurranty fruit masks anything more interesting and nuanced underneath. With a couple of hours in the decanter, this might have shown better, but straight out of the bottle it was uptight and starchy.

#3 served with a dessert of roasted peaches in amaretto, this hit the spot. Ripe peaches, beeswax, honey and fresh acidity, I didn't care where it was from, I just wanted more of this nectar. It was a Torres late-harvest Riesling from Chile.

There was a final cherry on top, a 2008 Viña Alicia Malbec Brote Negro - my notes for the last red simply read; ripe and plump, dark fruit, good texture.