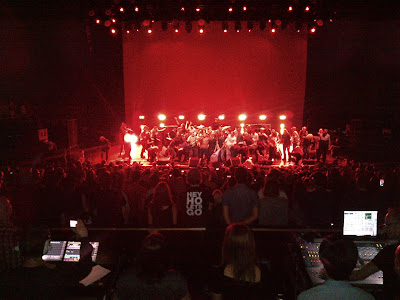 The Gig
A punk gig at the all-seater Royal Festival Hall is somewhat incongruous at the best of times - punk was never meant to be corporate.

In the UK, at least, punk was a short-lived late 70s phenomenon of pent-up angst and frustration, with a do-it-yourself approach whose energy quickly receded but not before it had enthused and infused a wave of new styles - post-punk, ska, Celtic rock, even early New Romantics - until corporate pop took over for much of the 80s.

Warm-up act Savages had angst, energy and intensity aplenty - but lacked much in the way of identifiable melodies. Getting themselves told by the stage manager that their droning finale of "Don't Let the [obscenity] Get You Down" had gone on too long and it was now time to wind up was an ignominious ending that they, and their few ardent fans, affected not to notice.

The main event of the evening, Iggy Pop - the Godfather of Punk - was, of course, superb, a great live act with noise, energy and presence - but also some tunes.

Appearing in his trademark, stripped-to-the-waist guise, skin-tight jeans and boots, he was, as Matt Walls observed, a blond-haired skeleton covered in slices of ham.

The crowd, mostly aging punks and rockers, loved it and yet there was something slightly disconcerting about a man of my parents' generation having to roll around the floor to make a living.

Unlike Lux Interior of The Cramps who always seemed unhinged enough to revel in his own campy, punkish ridiculousness or Mick Jagger who has the air of an energetic ring master, Iggy just seems to accept his fate as a performing punk for hire in his 60s.

Surely, at his age he could do something more dignified to make a living - maybe advertising car insurance ?

So substance and a sense of occasion, then - even if it was all too slick and assured to have any real sense of danger or edginess. And last year's event - the Twickenham double header - had that same mix of adrenaline, noise and sheer sense of occasion.

Côtes du Rhône, it seems, know how to put on a good show; and this is perhaps appropriate, for, as my World Atlas of Wine says, Rhône wines have "substance" - the same substance, intensity and sense of occasion as a rugby match or a punk gig. 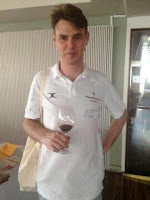 The Wines
Here are the wines I though best.