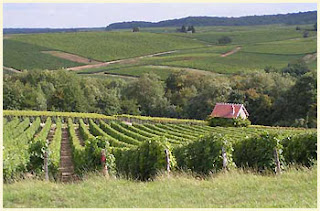 London International Wine Fair is huge - it's like being inside an airport hangar. So you need to be reasonably disciplined about what you plan to see and do if you are to stand any chance of ticking things off the list and not be side-tracked.

However, an unexpected find almost as soon as I entered was a Ukrainian wine stand run by Artyomovsk winery showing a range of fizzes, and decided - schedule or no schedule - I must visit it.

Pedants, linguists, nationalists and geographers, please take note - this was a Ukrainian winery, but being from the eastern Donetsk region, the language spoken is Russian, rather than Ukrainian (which is more widely spoken in western Ukraine) and I conversed with them in Russian. So, unless otherwise noted, I have used the Russian forms here throughout. Just in case you were wondering.

For me, Ukrainian sparkling wines are actually not that exotic or unusual - I lived there for a year, visited regularly on business for many years and still have close ties with the country.

From the little I know of how the wines are made, production is, or at least used to be, more industrial than artisan and there is no sense of terroir - a sad relic of Soviet-era collectivisation which saw farming as a merely process to be centralised and managed by bureaucrats. However, interestingly, the winery's website does have a section entitled "terroir" from where the picture at the top is taken.

Either way, the quality of Ukrainian fizz is, let's be honest here, not world class - but that's hardly the point.

In this country, we rather idealise the idea of long leisurely family meals which are the focal point of a big get-together and yet they seem to happen rarely - however, when I go to Ukraine to see friends, it is a regular occurance.

Any birthday, holiday or celebration is an excuse to sit down at a table groaning with food, often with several generations around it, and copious quantities of vodka, beer and fizz.

Fundamentally a farming country and much later to industrialise than the UK, Ukraine as a nation has not lost touch with the land, despite the clumsy attempts of meddling bureaucrats, and its people are more likely to have grandparents who work the land or parents who grow vegetables on an allotment known in Ukrainian as a "horod".

So for me, Ukrainian fizz brings back all those memories of social occasions which are about celebration, enjoyment and company rather than an analytical dissection of a wine's inherent qualities.

A bottle of fizz is there to create a sense of occasion and to be consumed along with a table full of hearty, filling, in-season peasanty food.

However, it is helpful to know what the wine is actually like, so here are the ones I tried.

The White Extra Brut was light, crisp and refreshing with frothy mousse and a pleasant finish.

The Muscat semi-dry was pretty much as described - grapey and floral from the muscatel with some residual sweetness on the finish.

The Red semi-sweet seemed a slightly confused mixture; on the one hand, there was sweetness and fruit and froth but there was also some body and more-sophisticated pruney aromas which, if fermented to fully dry, might have been more interesting.