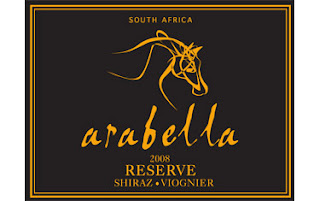 I first came across Syrah/Shiraz-Viognier as a blend relatively recently in a very impressive wine from New Zealand (reviewed here).

At the time, it was not (to me) an immediately obvious combination - Syrah (re-named Shiraz in the New World) produces mineral and tannic wines in its spiritual home of Hermitage in the northern Rhône, whilst Viognier (also originally from the Rhône) is something of a peachy, apricotty Chardonnay wannbee - but somehow it works, the two going together "like carrots and peas", according to the Naked Wines website.

This South African example from the Robertson Valley is the second wine I have tried from Naked and I was very impressed with the first - a Pfalz Riesling, reviewed here - so expectations were high for this one.

On the nose there are the typical Syrah/Shiraz aromas of blackberry, damson and plum, with hints of liquorice and pencil shavings, plus some vanilla from oak-aging.

The palate shows more fruit, some peppery spice and hints of coffee and chocolate with a wonderfully smooth texture and good length - as with the previous wine from Naked, it feels extremely well-made and balanced.

It is almost too easy to enjoy, but whilst there is some noticeable "new-world" style ripeness here, there's enough of a contrast from the toasty oak, coffee notes and smooth tannins to make it balanced, complex and "grown-up".

We could easily have finished the bottle off in an evening, but in the interests of seeing it develop, we re-corked and sampled the remainder over two more days. On days two and three, it was increasingly fuller, more complex and nuanced, with less of the obviously crowd-pleasing fruit and more of the interesting savoury aromas.

Based on that, I would happily lay this down for at least a year and expect something even more impressive to emerge.

In his 2004 Pocket Wine Book, Oz Clarke describes Robertson as undergoing a red revolution and Stephen is clearly one of those young Turks. However, he is also the 15th generation to be making wines on his farm - so much for this being the new world ! - and has a clutch of awards including Double Gold Veritas Wine Awards 2008 and Michelangelo Double Gold 2007. He also won Best Value Wine Award for 3 years running, Wine Magazine, 2006 to 2008.

Involved in wine-making from a tender age, Stephen started his Arabella winery from scratch in 2006 and with the help of his children Nicky and Jamie, turned it into a family business.

The Arabella name is a reference to the Arabian horses which Stephen keeps as an enthusiastic endurance rider.

For a review of a more recent vintage, see Old Parn's review here, but don't say I didn't warn you.