There comes a time in every parent's life when you finally get to leave the kids with their grandparents for an extended period and have some time being adults again, rather than merely parents.

Last weekend, the start of half-term, we made the familiar drive up to my childhood home in Cheshire to make the drop-off.

Our route from Cambridge invariably takes us through the Peak District and, having made my adoptive home in a very flat part of the world, I always appreciate the change in scenery.

An earlier tweet to local Michelin-starred chef Mark Poynton of Alimentum had put me in touch with Darren Goodwin of Losehill House who was fully booked with a series of weddings, but recommended we try Fischer's Baslow Hall.

Set just back from the main A61 from Chesterfield to Buxton, I have lost count of the number of times I must have passed the place without it registering as potentially somewhere to visit - there is merely a slightly lurid green and turquoise sign by the road and a drive that leads up a hill, with no sight of the hotel and restaurant from the road.

We set off from my parents' Cheshire village mid-morning and followed a scenic and hilly route that took us through Pott Shrigley, up the Brickworks with its Victorian post box and along a winding route to Buxton.

From there, we headed down to the genteel surrounds of Ashford in the Water and skirted Chatsworth Estate before arriving at Fischer's in Baslow, sitting at the foot of the dramatic cliffs of Froggat Edge.

Opting for a Tio Pepe fino on arrival, choosing the Taste of Britain tasting menu was, for me, a no-brainer and Mrs CWB allowed herself to be persuaded, so the only decision left to be made was the wine.

I asked for a recommendation from the half bottles and we were advised that a Sancerre 2009 Lucien Crochet that I had already spotted would work best with most of the courses.

Built from Derbyshire stone, the feel of the interior of Fischer's is traditional and Old School with a touch of formality - I rather like it; it has none of the self-conscious knowing irony and painted-on quirkiness of the metropolitan style - even if perhaps, with hindsight, we were a little under-dressed in our designer casual.

The first course was a simple, classic consomme that belied the tone of the rest of the meal - a thimbleful of perfectly clear and delicious soup, the only touches were a garnish of finely chopped chives and two cheese gnocchi.

What remained consistent across the rest of the meal was the superb quality of everything and the sensible portion sizes that left us full but able to finish everything.

From here on, there were six courses of beautifully presented, dainty-yet-complex dishes that took traditional European ideas and blended them with some Pacific Rim influences to give intense flavours, varied textures and unexpected matches.

The Taste of Britain theme of the meal was perhaps the least convincing element - yes, there's nasturtium from Baslow Hall Gardens, hand-picked Cornish crab and wild Scottish venison, but it felt like it might have been better described as a quick trip around the world.

Having tucked into the breads - slices of brown, treacle-flavoured loaf and white pesto and tomato rolls, we were brought a tempura of partridge breast - the soft tender meat wrapped first in seaweed and then in crispy batter.

And if this were not complicated enough, it was also served with toasted nuts and grains and a pine-nut puree - in lesser hands this would have been a quirky idea that didn't quite work, but this was executed perfectly and felt seamless.

The wine also worked superbly  - mouthfilling and flinty, with prominent acidity, it cut through the food and felt like part of the meal.

The roast pumpkin mousse was served in three cylinders made from pumpkin flesh, with Berkswell custard and grated truffle with a sticky Pedro Ximenez sauce.

A crab and bloody Mary cannelloni was served with a savoury ice-cream, freshened up by lime and lemongrass snow.

Again, what could have descended into ostentatious cheffiness and over-complexity worked perfectly in practice as a result of deft execution.

The main was a saddle of venison - two neat little cubes of perfectly tender meat, seared on the outside and still pink in the middle that had even the well-done-loving Mrs CWB cooing with delight - and came with suitably charred aubergine puree and Norfolk cucumbers.

Pre-dessert was a white chocolate mousse with a refreshing lemon verbena sorbet, whilst the dessert itself of chocolate tree trunk with orange and chocolate mousse, lime and dark chocolate sorbet was declared by Mrs CWB to be "very rich".

This led me to observe that it really needed a brandy and an espresso to go with it, which earned me a look that said "You're driving - don't even think about it".

Instead, we made the short, steep drive up to Froggat and, hand-in-hand, strolled along the Edge where the clouds parted and the sun came out giving us a breathtaking view over the rugged, north Derbyshire countryside. 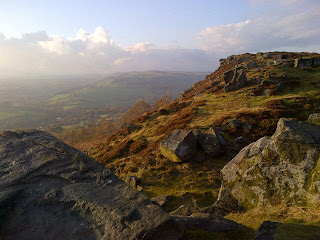 A perfect moment at the end of a wonderful lunch.

The Taste of Britain menu is available from Monday to Friday and costs £50 per person, or £90 with matching wines for those not driving.

The Box Tree, Ilkley, at 50 - written for Jancis Robinson's site
Dinner at L'Alembic
Dinner at Alimentum
Lunch at The The Three Horseshoes
Lunch at the Hotel du Vin