Just a few steps away from the re-developed cattle market area, Cherry Hinton Road sees the opening of Cambridge's newest wine shop, another in the expanding chain of Cambridge Wine Merchants. 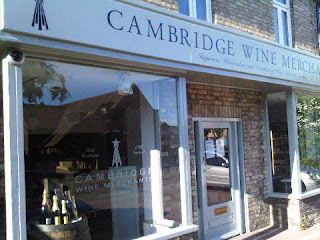 CWM owner, Hal Wilson - who already has branches on Mill Road, King's Parade (directly opposite King's college) and Bridge St, as well as a number further afield - invited me to drop round on the opening night to meet the manager Steve Hovington and see for myself.

The look and feel of this newest branch will be familiar to anyone who has already visited a CWM branch - the trademark eggshell blue colour scheme and dark wood floor give it a tasteful and sophisticated yet unpretentious feel. The same can be said of the wine list and although it is standardised across all outlets, there were a couple of items here not yet available in other branches, including a white from Ribeiro in Spain.

Steve, who had just got back from a series of en primeur tastings in Bordeaux and also is CWM's WSET tutor, explained that what also sets this branch apart is an indoor seating area which will serve drinks on the premises (as soon as the on-licence comes through), making it more than just a place to buy wine to take away. On that very hot evening, the potential and appeal of this was immediately obvious.

Unlike, say, Trumpington which has Noel Young and Waitrose, or the Mill Road area which is well-served for wine merchants, Cherry Hinton has little in the way of "serious" wine outlets, so this newest CWM is a welcome addition for wine-drinkers in the area

The location is the site of a former Wine Rack which was around for many years, but disappeared when parent company First Quench went into administration last year. There was also a relatively short-lived independent called Veritas which disappeared a few years ago. Steve explained that this branch has the advantage of much lower overheads than in central Cambridge, but all of the central support that CWM offers in terms of sourcing wines and marketing them.