Cheese, like wine, is an artisan product - largely hand-made, a living, breathing product that matures and changes over time, each example being ever-so-slightly different from the next and responding minutely to processes and storage conditions.

If you want to see what could happen in the world of mass homogenisation of wine under a fiver in a few years' time, just look at a row of pre-packed, industrially-made cheeses on your local budget supermarket shelf for the potential consequences.

In this country, at least, cheese has gone the way of chicken and salmon - a once expensive and flavoursome delicacy, it is now frequently a mass-market, mass-produced product whose only role is to provide bulk, but not flavour, to a meal.

But it was not always the case - in the days before refrigeration, cheese-making was a way of maintaining all the nutrients, vitamins, minerals, protein and general goodness in milk without it going off. Moreover, cheese-making was a seasonal activity - it would only be made when the milk was best suited to being made into cheese, such as in spring when the cattle went out and fed on the scented new grass.

It was also not made on an industrial scale as today - all farmhouses would have a dairy where the cheese would be made and stored to mature. The best conditions for cheese are not in the fridge at all, but at cellar temperature (about 14C, cool and damp).

It was the introduction of transport links that sounded the death knell for locally-produced cheeses and made it commercially viable to produce in much larger quantities. A book I have just been reading points out that this increasing specialisation is the basis of our modern wealth and lifestyle - well, good for us, but in the process and also as a result of post-war decisions to rationalise British farming and pursue quantity and reliability of supply, we have lost out on quality - as a trip to France or Italy will quickly demonstrate.

As Charles de Gaulle once said - How can anyone govern a nation that has two hundred and forty-six different kinds of cheese? ...

And yet, the tide is turning ... Britain certainly has become a noticeably wealthier place since the stagflation and three-day week of my childhood in the '70s. As a result of the yuppies of the ;80s and the caring-sharing '90s, we have become more interested in the quality of the food we eat and, yes, there is a resurgence in British artisan cheeses, as Meril Deal of Artisan Cheese explained at a cheese-tasting evening at the Cambridge Food and Wine Society.

Meril provided a range of cheeses to try, the first being three examples of the same cheese (a Berkswell goat's cheese) of different ages to show how even a few more weeks' maturing can change the quality - the youngest example at six months old was smooth and creamy and similar to a manchego, whilst an example with just an extra three weeks' age (and a washed rind) was firmer and more flavoursome. Finally, there was a 14-month example which had a much stronger, slightly farmyardy, aroma, a deeper yellow colour and a firmer texture.

As Meril explained, British artisan cheeses are still a very new concept and are generally made in small quantities by small businesses which cannot, yet, afford the long maturing times we associate with some continental cheese as they need the cash inflow just to make ends meet. Over time, however, I feel this will surely change as the reputation and popularity of these cheeses grows sufficiently to provide some economies of scale and allow investment in longer maturing times. 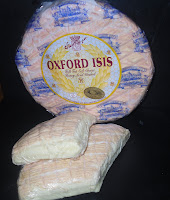 Next came a taleggio-like cheese called Oxford Isis; it was smooth and creamy with a soft, yeasty rind , followed by a crumbly Caerffili and a goat's cheese called Rachael; the latter was described as sweet, curvy and slightly nutty, apparently like the eponymous Rachel herself.

Then came a Waterloo, soft and creamy - similar to a Brie - a blue-veined Barkham, an organic Hafod from Wales and finally a sheep's milk Beenleigh Blue from Devon.

The cheeses all sell for around £20 - £30 per kilo, so not cheap, but then again, not much more expensive than, say, Waitrose which is the only supermarket that can come anywhere close to competing in terms of quality and flavour. Meril sells her cheeses at various farmers' markets around the Cambridge area - details below.

To accompany the cheeses, we had a selection of wines and beers, all sourced from Bacchanalia; contrary to habit, I stuck with the red wines and found that they matched surprisingly well with the cheeses ? Was it the wines or the cheeses ? As both were new to me, I can't say, but something worked well.

The Cheeses - along with Meril's tasting notes

Berkswell - an exceptional firm sheep’s milk cheese made at Ram Hall Farm in the West Midlands with raw milk and using traditional animal rennet. It has an unusual flying-saucer shape and natural exterior rind. £2.75/100g

Oxford Isis - made by the Oxford Cheese Company since 2003, this soft cheese is rind washed in Oxfordshire Honey Mead to give it a supple texture and floral, pungent aroma and taste, which strengthens as the cheese ages. £2.40/100g

Gorwydd Caerffili - traditionally made with raw cow’s milk and animal rennet by the Trethowans in South Wales since 1997, firm but crumbly, creamy and best at about 4 months old. £2.15/100g

Waterloo - made by Anne Wigmore with raw cow’s milk in Riseley Berkshire. This is a brie style cheese, creamy and rich in taste, best when it begins to ‘run away’! £2.40/100g

Beenleigh Blue – a gorgeous pasteurised sheep’s milk blue which is both sharp and sweet. It’s made near Totnes in . It’s recommended to those who like strong cheese. £2.90/100g

Meril can be found at the following venues:

The Wines and Beers - all sourced from Bacchanalia in Cambridge